Having spent over 30 years professionally dog training there has been no greater positive change in the profession than the introduction of the clicker. I first started training back in 1979 in the Royal Air Force. Dogs were donated by the public mainly because they couldn’t handle the dog once it matured. These dogs were often aggressive when not handled in the correct manner. As part of the instructional staff my role was to develop a relationship and bond and to train them for their role as an Attack dog ready to patrol the airfields of the world. On average it took about 8 weeks to develop a dog with no training into a controlled biting machine. 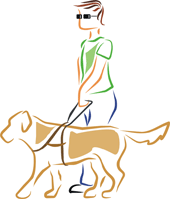 Contrast that with my introduction to Guide Dogs when I joined as an instructor in the 80’s. My first role was to complete a 3 year Apprenticeship which delved into the complete understanding of the dog and its training needs. Each dog (on average) would take 8-12 months to train. Comparing this with the short training role in the RAF I realised I had to reappraise my training and I was dealing with a totally different beast. Training incentives had to be more regular, more suitable, more subtle. Guide Dog training although based on the instinct of self preservation was not always the first thought of a dog that lived in a less threatening world than its natural environments. Training had to be SMART. The role of Guide Dogs has to be enjoyable to the dog. Without it the dog wouldn’t work. Positive Training on all levels at all times was the continual requirement.

Back in 2000 I was introduced to clicker training. Having come from a background where we felt using treats undermined our training I initially dismissed it but 4 yrs later I enrolled on a clicker course that has enhanced my knowledge and skill ten-fold. The world of positive training really opened up and now all my courses are clicker led. The clicker and its training ethos has opened the dog to a more relaxed, happier training environment where dogs can learn at their own rate and be rewarded for what they CAN do and NOT told off for what they don’t do. A training arena where all the responsibility to succeed is on the trainer and not on the dog. A fantastic environment to learn in.

Come and join me in my training. Let me pass on 30 years of professional training so you get the best out of the dog and learn about what your dog needs to succeed.